New York Bagel Cafe & Deli, the creation of enterprising New Yorker, Joe Smith in 1994, was a chance for Smith to craft his own path in the franchise fast food marketplace. Taking an American favorite, the bagel, Smith pioneered an archetypal New York bagel flavor and deployed his flavor to his many locations across the nation. NY Bagel Cafe and Deli quickly caught on, and Smith structured the company for ease of operation and investment, and to efficiently "spread the wealth" with other enthused starters. 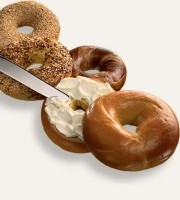 According to recent studies, U.S. bagel sales have grown nearly 500%+ since the 1995. Here at New York Bagel Cafe & Deli, we invite you to join us in profiting from this growth. New York Bagel Cafe & Deli runs circles around other bagel stores, offering a delectable assortment of foods made of only the finest ingredients, from names like Boar’s Head that customers are loyal to and love.

New York Bagel Cafe & Deli is proud to serve its customers regardless of venue; be it a company meeting, breakfast, lunch, or even a party! Our growing fan base and consistent positive reviews indicate only one thing: NY Bagel Cafe and Deli is on the rise.

No other bagel place can compare to NY Bagel and Cafe

Why Is NY Bagel Cafe and Deli So Great?

Our bagels are delivered to your shop half-baked so you do not have to prepare them from scratch and simply bake them, making it easy to serve fresh hot bagels to the hungry customers.

At New York Bagel Café and Deli, we take immense pride in our delightful staff, and our ever growing group of franchisees.

Reasons Why Franchisees Pick Us Over Other Franchises:

NY Bagel Cafe & Deli is the brainchild of Joe Smith, an enterprising upstate New Yorker who saw the opportunities back in 1994 for making inroads in the franchise fast-food market. Take a proven commodity – everyone’s favorite “light” meal, the bagel – and then take it one step further. Offer the original New York bagel, and create a cornerstone for a bagel franchise … without the typical franchise bagel taste. You’ll find that NY Bagel Cafe & Deli runs rings around other bagel shops with a delicious array of complementary foods. Like popular Boar’s Head deli meats, the smoothest flavored creamed and quality hard cheeses; succulent smoked salmon and richly brewed gourmet coffees.